Yamaha is known for constantly trying to improve their products. Even if a product is widely successful, they tend to not just rest on their laurels but rather are always seeking to innovate and provide their customers with the best that they can. This constant quest for perfection can be quite confusing to the consumer as Yamaha does not make the process of figuring out the various Yamaha Generations very easy.

What do I mean by “Yamaha Generations”?

Maybe I have lost you already… so let me back up a quick second… for the purpose of this article, I will focus primarily on two models of Yamaha professional alto saxes; the Yamaha 62 Alto Sax and the Custom 875. Both are more modern designs and have each had multiple generations and revisions. So in the case of the 62, there is the Yamaha 62, the 62 “Mark II” and the 62 “Mark III”. Some refer to these as 1st, 2nd & 3rd “Generations” of the 62. I sit in the “Generations” camp due to the eventual 6th Generation of the 62 coming out in 30+ years… it can’t be called the Yamaha 62 Mark VI… that would just be plain weird.

There are some people, customers and retailers, out there who claim that there is now a 4th Generation or 62 ” Mark 4″ out there (which there isn’t, at least not really…). So I wanted to attempt to clear up some of the confusion surrounding this topic.

Again, I am using the saxophones as my reference for the discussion, but Yamaha also uses some of this generational model sorting in their other instruments as well.

“The professional Yamaha YAS-62 and YTS-62 model saxophones have been the workhorses of the Yamaha saxophone lineup for over 30 years. The durability of construction and quality of sound are legendary. In a cluttered marketplace, the 62 clearly stands out as the best combination of professional features and affordable price.” (source: usa.yamaha.com – press release announcing the 3rd Generation of Yamaha 62 saxophones).

The original Yamaha 62 Alto Sax debuted in 1978, replacing the older 61 Alto Sax. See back then, Yamaha kept the “series” number of “6”, which indicates a “professional” series (60 or 600 Series depending on the instrument) but made the logical succession from 61 to the new replacement model of 62. Had Yamaha kept with this progression though, there would eventually come a time where the 68 would be replaced by the 69 and then eventually by the 70… and herein lies the problem for Yamaha. Since they sort their instruments by series (6 indicating professional), the inevitable jump to a new series number such as 7 could lead to confusion in the series designations.

So at some point, someone at Yamaha decided to move to what I call a “Generation” modeling scheme for their product revisions. In the case of the Yamaha 62 Alto Sax, the first major revision became the Yamaha 62 “Mark II” Alto Sax (also referred to as the 2nd Generation), with an official part number: YAS-62II. For those who might be wondering, the “YAS” stands for “Yamaha Alto Sax”.

But wait, there’s more…
On top of this, there was another “international” version of the Yamaha 62 Alto Sax that was called the “Mark II” that is DIFFERENT than what we in the USA call the Mark II. That “first Mark II” 62 alto was offered internationally but Yamaha USA didn’t adopt it and continued to have the original YAS-62 made and offered in the USA. Eventually, Yamaha corporate moved production on to another “Mark II” YAS-62II that is the Mark II model that we saw in the USA. Since then, they have released the current 3rd Generation Yamaha 62 Alto as the YAS-62III which is the same internationally as it is in the USA.

What Generation Do I Have?

Most customers assume (understandably so) that the generation of their model will be notated on the instrument. This would make distinguishing between designs easy. Sadly, this is just not the case. The 1st, 2nd Europe, 2nd USA & 3rd Generations of Yamaha 62 Alto Sax all simply have “YAS-62” stamped on their body tubes. This means that the only way to determine your generation is based on the features present on your instrument!

I wish that I could give you an easy out on this one, but you simply need to do your homework. Thankfully, you have this wonderful tool called “the internet” that allows you to find that information! There are plenty of places where you can compare the differences between the various generations of instruments.

Sometimes Yamaha will make minor changes (revisions) to a model that would not warrant a full new model number or generational marking. This is essentially a change that doesn’t change the “design” of the horn, but rather is an improvement while maintaining the existing design (i.e. pads, necks, case, etc…). In the case of the current Custom Series saxophones for instance (82ZII and 875EXII), there was a pad change made in 2019 where Yamaha started to use the higher end Pisoni Pro pad, which has become a de-facto standard among top tier pro saxophones. These revisions will commonly occur without the hoopla of a press release.

Well, there is, but it is confusing and leads to some retailers mis-representing what they have. This all has to do with the box markings.

The Confusion of Box Markings

The box markings from Yamaha account for the revisions to a product, regardless of whether they are a new generation or a minor update. These revisions are notated on the box with a “//” followed by the revision number. However, these revisions are not publicly listed anywhere for the customer to ascertain the difference of these revisions (hint, hint, Yamaha). As a result of these box markings, I commonly receive emails, phone calls & social media messages where customers claim that there is a new generational design that is available on the market when it isn’t necessarily.

Well, I can tell you that the Roman numeral II on the box followed by a // would be awkward to read at a glance – which is why the Roman numerals are not marked on the boxes at all. These codes need to help in inventory control & management and thus be easier to read. Personally, I would have bet on the code of YAS-875EX // 04 since the EX would be easier to see at a glance over the original YAS-875… but alas, I would be incorrect in that guess. 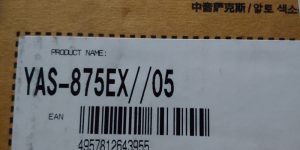 The “// 05” indicates that this is the version of the original 875 design. This means that it is a “Mark II” model (which was introduced as the // 04 model), but is the newest version with the Pisoni Pro Pad upgrade. So on the YAS-875 Series, here’s what the versions would be marked on the box:

So to round out this discussion at least a bit… on the other professional altos, the 82Z is currently in version // 03 which is a YAS-82ZII, with Pisoni Pro Pads. The 62 is in version // 04  which is the current iteration of the YAS-62III. See below:

Why Are We Posting This Anyways?

Good question… to educate. There are a lot of people out on the internet right now looking to use these sticker codes to trick consumers in to believing something that is not true. They do it to convince you that they have the newest models and no one else does so that you buy from them. In reality, they likely are getting you the current design, but the ethics reek. The internet is full of bad information and people looking to take advantage of consumers whenever they can. Don’t let them!

We always seek to keep customers informed and up to date with the best information possible, the truth! So whether you are fully in the know or are confused as all git out, we are here to help.

Can you tell me what generation my Yamaha is?

If you bought the instrument from us, maybe… we track by official model changes in our own system, not revisions. If you did not purchase from us, then we have no database that we can search.

Yamaha might not be able to help either… yes, you can contact Yamaha directly online here: https://usa.yamaha.com/. However, that is Yamaha USA. If your horn came through another distribution office (different area of the world), Yamaha USA won’t have the record. Yamaha USA’s records are also only searchable dating back to some time in the 1990’s as well.

So if you do contact Yamaha, remember to be courteous of course and just let them know what your model number is (as stamped on your instrument), your serial number, and be specific with your question. Don’t want them getting mad at me for referring you to them!

Be well and stay musical,