Henri Selmer Paris is the most famous name in the world of saxophones. Their designs drive the industry. While most will not dispute these statements, there is one more statement that most will not dispute as well: Selmer Paris saxes are expensive! Granted, we are talking about handmade, professional saxes crafted in France (thus under European labor laws & rates), but one cannot ignore that with the Selmer Paris name comes a price tag commensurate with their standing as the most sought after professional sax maker. As players, we all at some point have wanted to own a Selmer Paris sax, but the price got in our way. This is where the Selmer Paris Axos line comes in…

The Selmer Paris Axos line debuted with the Alto Sax model in 2015. This model was part of a larger project from Selmer Paris called “SeleS” and was designed to bridge the gap between legendary Selmer Paris performance with consumer affordability. The SeleS project produced both clarinets and saxophones and combine “new manufacturing techniques” and “external industry collaborations” with Selmer Paris’ design and manufacturing to achieve this goal.

While much of that might sound cryptic and vague, the reality is that none of it is new. Specifically, the “external industry collaborations” part of the explanation. This essentially means that another factory is used to help in production in some way shape or form. The question here is the where, what and who of it all. Obviously, many makers will keep these secrets pretty close to the vest.

Selmer Axos models have their “acoustic soul” made in the France facility like all Selmer Paris saxes. This means that the neck, body, bow and bell tubes are all made side by side, using the same manufacturing methods and materials, with all other Selmer Paris models (Series II, Serie III & Reference). With the Axos, some of the keywork is also made in the France factory, but then all of these parts are sent to the external collaborating factory is Asia. Once there, the assembly, padding, lacquering and engraving is performed to Selmer’s specifications. Once completed, the finished horns are returned to France for Selmer Paris to perform all final quality control checks on the horns.

With the new Axos Tenor Sax, Selmer has decided to rebrand the SeleS by Selmer Paris line and absorb it in to the official “Selmer Paris” brand family. This is a solid decision and one that we support. The quality of the Axos is every bit that of the top end Selmer Paris models and really should have bore the Selmer Paris sole branding back in 2015. The original SeleS by Selmer Paris was done largely as a result of the “external industry collaborations” in order to differentiate the 2 manufacturing styles to the customer, but I feel that all it did was disuade customers from giving the Axos line a serious consideration. So with the release of the Axos tenor, Selmer is finally correcting that branding and acknowledging what I believe was present with the Axos Alto in 2015, the Axos is a real Selmer!

External Collaborations Is Not a New Thing

While this process can sound a little odd to customers, the truth of the matter is that this is nothing new. Many major manufacturers utilize something similar… heck, it isn’t even anything new for Selmer Paris!

During the production of arguably the most famous saxophone model ever made, the Mark VI, Selmer Paris utilized 2 external factories to help with manufacturer much in this same way. With the Mark VI, all of the metal work was done by Selmer in France. However, while some of the horns were finished in France facility, there were others that were finished in the UK and USA!

These external facilities would pad, lacquer & engrave the Mark VI based on their own market’s needs/demands. This is why you can find different engraving patterns, brandings & lacquering styles on the Mark VI. These styles were indicative of the final finishing facility used on that particular horn. So here in the USA, you are most likely to find a Mark VI that was finished in Elkhart, Indiana… though you might find some of the London finished models as well since they serviced dealers in Canada at that time. Whereas if you are based in Europe, you are more likely to find horns finished in the Paris factory or the London facility.

None of these facility specifics changed that the horn was still a Mark VI… think of it in a way like a trim package on your favorite new car!

Back to the Axos Tenor Sax & it’s Design

So now that we have the history of the Axos, as colorful as it is, and a better understanding of the reason it is more affordable, lets talk about the sax design itself!

I was lucky enough to have a Prototype Selmer Paris Axos Tenor to play around with here in our shop prior to it’s launch. This prototype, I have been told, is production level so it is a good representation for the final production sax (which will start shipping in the USA in early February 2021). Furthermore, we have the Axos Alto Sax already on the market to compare build quality to and can confirm that the prototype tenor is on par with the build quality of the alto, and thus should be for the production model tenor.

The design of the Axos line on both alto and tenor seems to combine elements of the Super Action 80 Series II and Serie III models. This execution is done a little differently on the tenor than it is the alto, but the performance characteristics that they were seeking make sense on both. Here is what I find in the design influence of the Axos Tenor:

So overall, the horn is a Series 3 on the mechanical side with a Series 2 bore. Why is this? The Series 2 is to this day, the longest production Selmer Paris design ever made. It produces a rich, broad tone with balanced intonation. However, it has a heavier response. The Series 3 was designed to be a quicker responding horn with a brighter tone. So by staying with the bore of the 2, the Axos tenor sax is able to maintain the richer, broader tone. The lighter “mini-rib” construction of the Series 3 allows for less weight on the body tube and thus less mass that the player has to make change vibration every time they change a note. This improves the response of the horn. Lastly, the Series 3 neck angle allows for less resistance on the air flow through the neck and a more preferred playing angle. 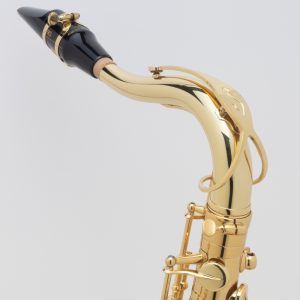 There are a few other things of note. The biggest two (acoustically) are the lighter construction weight on the neck (Series 3 style) and the lighter weight neck receiver on the body. These are both done in the spirit of the other construction changes mentioned above. This allows for less resistance and thus a quicker responding instrument. The thumb rest is plastic like the Series 2 which younger players especially will prefer while still being comfortable for the adult hand.

The pads are the same professional grade as the top models with domed metal resonators on them. The horn is equipped with a good case (though a little less fancy than the BAM cases used on the other models) and a Selmer Paris S80 C* mouthpiece to round out the package.

The most important part of it all: this horn really plays! The Axos Tenor gives a very balanced, resonant tone that is very much in the “Goldilocks” zone on most metrics. Not too bright, not too dark. Not too lively, not too heavy. Really balanced and excellent for really any playing style. Intonation is on par with other Selmer Paris models and the build quality is solid.

Most importantly, Selmer has really achieved the goal as stated at the top of this post – Selmer Paris performance with consumer affordability.

This horn fits a price point that is in line with other “entry level professional” models such as the Yamaha 62 and Yanagisawa T-WO1 as well as the other Asian made horns in the “professional” category such as the P.Mauriat and Eastman top level horns. However, unlike these horns, this is truly a Selmer Paris. Whether this is good or bad depends on the player. What’s key here is that the consumer now has a Selmer Paris in the price point that Selmer Paris has never occupied.

My family’s shop is an Official Selmer Paris ProShop so of course, we have these for sale too! However, this review is based on the performance, not the sale and I highly encourage you to check out the Selmer Paris Axos Tenor Sax for yourself as I think you will be very impressed! 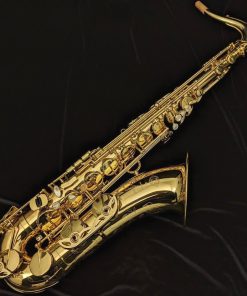 You can also check out the Selmer Axos Tenor on Selmer’s website by clicking here.