Selmer Paris, the world’s leader in professional saxophones has been teasing the Bari market for years with rumors and hints at a new Bari sax design. Back in January 2008, I posted on the Sax On The Web (SOTW) forums that we had a chance to see one of the first Series III bari saxes in person and play it.

As I posted on the SOTW forums, we were VERY impressed with the playability of the new horn. The intonation was superior to previous designs, the ergonomics were much improved from the Series II and most importantly, this horn had the response that was lacking from the Series II.

Overall initial impression: Great playing horn and arguably one of the best we have ever played.

Fast forward to today and we find ourselves on the “eve” of official shipping. We have obtained 1 stock photo of the new Series III bari sax and will show you all some of the new aspects to the design.

First, the concept of this horn was to create a low A bari that vibrated and responds like a low Bb bell bari. This is a tricky feat to accomplish as part of the problem is that the extra weight created by the longer bell of the low A bari severely hinders vibration. Many players want the low Bb bell response but NEED a low A key these days.

So in order to accomplish this, Selmer decided to lighten the horns overall weight. This was done in several ways. First, they got rid of some on the bracing in the neck crook. The weight at this point of the horn can make a substantial difference in the overall response of the horn through all the registers. Combine the lighter weight neck crook with the improved bore design and you get a good performance improvement. 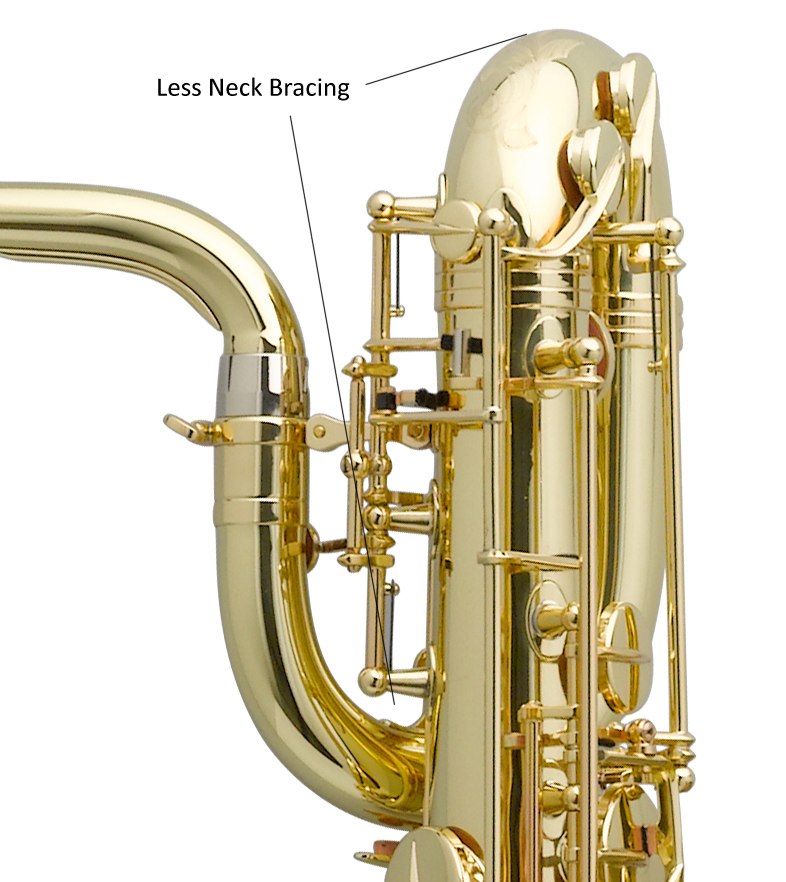 I also notice a tighter bore neck that then seems to rapidly increase once it hits the body of the horn. I believe this is a tighter bore neck then the Series II design was which if so, will give greater compression to the air column and better speed giving a more focused and responsive sound. 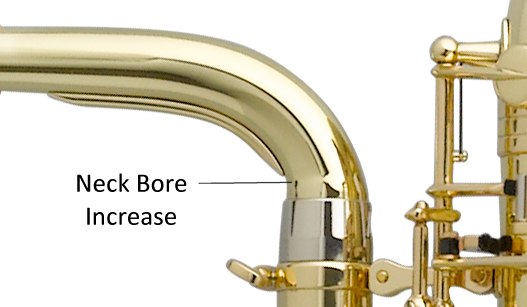 Another change done to decrease weight is the ribbing construction. For those who don’t know what this is, read my post here about it.

With the Series III alto, tenor and soprano, Selmer opted for a “mini-rib” design. In stead of doing a full solid rib in any spot of the horn, they do several smaller ribs. I refer to this as a “split rib” myself since they are still doing a ribbed construction of sorts, they are just splitting up a rib instead of making a singular rib smaller. 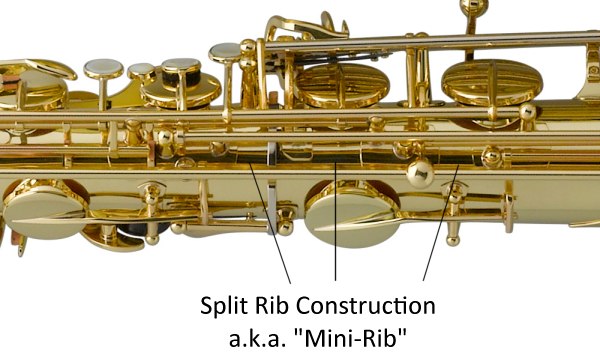 This split rib is from the rib holding the posts of the left hand stack of the horn. This I believe makes a big change in the vibrational response of the saxophone. This design concept doesn’t work on all horns but rather depends on the bore. From our experience playing the Series III in January 2008, this split rib construction is a good idea on the Series III bari.

The last area where Selmer chose to decrease the physical footprint on the horn was the bell to body brace. This is one area where I personally am going to have to disagree with the choice made.

With a low A bell, the other negative aspect is the ability of the larger bell to be knocked out of proper position. This type of damage can happen rather easily on a low A bari. Most manufacturers have switched to a “3 Point Bell-to-Body” brace. The concept is that instead of having just the 2 contact points, one on the body and one on the bell, a 3rd contact is added to the opposite side of the body. This extra brace helps stabilize the bell.

We did bring this up to Selmer when we were trying the horn and they believe that the horn would not need it and that the 3rd contact point effected the performance of the horn. They also believed that the people who would be buying such a horn (price tag of $9,549) would tend to be more responsible players and would take better care of the horn then your typical high school student would. 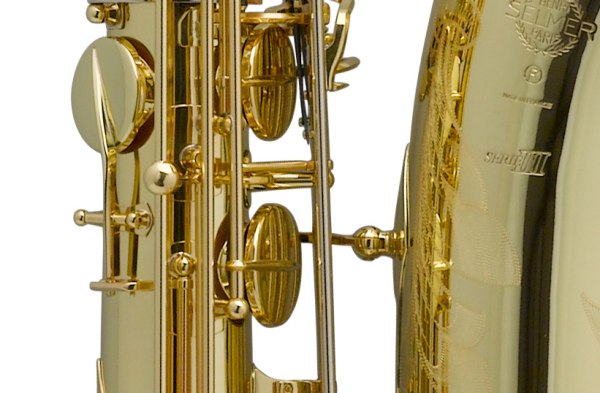 Only time will tell whether or not this was a good idea. While I do not have photos of the case, I do recall that the case provided with the horn does seem to brace the bell of the bari better then most bari cases. This can help with this concern but in my opinion, will not fully prevent it from happening.

The last interesting design concept to note on the Series III bari is the new approach that Selmer has take on the floor peg. Some players have floor peg mounts put on the bottom bell bow of their bari and now several companies offer this as an option. Yanagisawa for instance offers a floor peg mount.

The idea is that with a floor peg, the player no longer has to worry about supporting the weight of the horn when playing thus allowing their hands great flexibility for playing.

The problem with most floor pegs is that even when not using the peg, there is a rather large mounting bracket still attached to the bow of the bari. This bracket adds a lot of weight but more importantly, if the horn suffers an impact on the mount directly, it can cause catastrophic damage to the bell of the horn.

For the Series III, Selmer has come up with a great mounting idea. The horn is standard equipped with 2 mounting knobs on the front of the bell. When the peg is not in use, these knobs have brass covers screwed on to them. To use the peg, one simply unscrews the covers and then screws on the floor peg. This gives great support but without the negative aspects. There was even talk of offering a “standing” position peg as an accessory so that the player can stand with a peg attached that is long enough to reach the floor.

All in all, the Series III bari is definitely a different animal then anything we have seen from Selmer in the past. Overall, I love the changes made on the horn. My one concern is on the bell to body brace. Hopefully I am wrong.

I have great respect for Patrick Selmer and all the team at Selmer Paris. I think that they make great products and have continued to impress the industry with revolutionary designs and performance.

If you are interested in purchasing the new Series III Baritone Sax, please call our store Toll Free at 1-888-830-0474 Mon-Sat 9:30-6:00 West Coast Time. You can also email me at music@kesslermusic.com