Leblanc is not a “new” name for clarinets… but due to a relatively brief absence from the market entirely, it almost feels as if it is. In reality, Leblanc traces its history back to 1750! That is not a typo… Leblanc’s history traces back 267 YEARS!

A Very Brief History
The Leblanc company starts its history in 1750 as the Noblet company in France. Eventually, Noblet was sold to Georges Leblanc in 1904. Eventually, Leblanc France would be bought by the Leblanc USA company (who distributed Leblanc France products and made the Vito products) in 1993. Eventually, Leblanc USA (including all of its other brands such as Holton and Martin) was purchased by Conn-Selmer (in 2004), the current owner and manufacturer of Leblanc (as well as Holton & Martin) instruments today.

A history/bio of the Leblanc company can be found on Conn-Selmer’s website by clicking here.

So What Happened?
Obviously with any market shift or change, there are always MANY reasons that play in to the events. However, from my view, I feel that the tipping point was in 2009, when Leblanc released the Bliss clarinets. These clarinets were designed between a collaboration of Leblanc, Morrie Backun and Julian Bliss. These instruments were marketed more as Bliss clarinets rather than Leblanc (though the Leblanc name was still associated with the product). As a result, I feel that the market started to forget the Leblanc brand at that point which means that for many people, Leblanc disappeared from the market 8 years ago.

While the Bliss clarinets continued production and offered wonderful performance enhancements, there became a growing call for the Leblanc performance characteristics of old. So, that meant that it was time for Leblanc to go back to the drawing board.

The Resurrection of the Leblanc Name
For the next part of of this blog post, I decided to reach out to Julian Bliss. Julian was kind enough to give me a wonderful description behind the why & how that eventually lead to the Leblanc Serenade.

The Serenade was the result of all of us at Leblanc/Conn-Selmer going back and looking quite closely at the previous instruments Leblanc had made and what made them successful. In the USA, the Normandy and Noblet had quite a following so we decided to focus our attention on those instruments to start with. Myself and the team sat down and analysed these instruments, the drawings and started to put a picture together of what people liked about them. We also did the same for the Bliss and the Sonata. After all of this we had a wealth of data, tuning charts and a decent amount of feedback from teachers about these instruments.

Last year the decision was made to ‘resurrect’ Leblanc. Leblanc is one of the oldest musical instrument manufacturers dating back to 1750, which makes it actually older than the U.S.A! The decision to bring Leblanc back to its former glory was a no brainer. We talked quite a bit about which instrument to start with and an Intermediate Clarinet seemed like quite a logical and good place to start. Even the name harks back to traditional Leblanc, there was the Sonata, the Concerto, the Opus, Symphonie…you get the idea. In the end the name Serenade fit the bill perfectly.

There was never any doubt that the Serenade had to be made right here in the USA. Over the years we have built up a wealth of knowledge and great people at the factory in Elkhart, and the factory is just down the road so its easy to keep an eye on everyone! Currently every single part of the Serenade is made by us in Elkhart. There are many reasons for us to do this. Predominantly it comes down to being able to control our quality and quantity.

People ask me quite a lot.. ”So what is the Serenade?” Think of all of the best bits of the Normandy, Noblet, Sonata and a Bliss…That’s what we think the Serenade is. Leblanc has always been known for being easy to play, have a great scale and a nice clear, dark tone. Essentially we wanted people that remembered Leblanc to pick up the instrument and have it feel like home. On the same token we wanted people that had never played a Leblanc before to pick up the instrument and feel that they could play it uninhibitedly quickly.

Yes there is no doubt that we looked back at the ‘historical’ Leblanc Clarinets, but the trick was to bring that into the present day and modernize it to suit modern day players and their expectations. How we did that?…well that’s the secret part!

My Thoughts on the Leblanc Serenade
Overall, I think the team at Leblanc did an outstanding job. This clarinet has a rich tone that is absolutely in line with Julian’s description, but it has a response that is more in line with modern clarinets. Combine this with the overall affordability of the clarinet and the options (like the Left Hand Eb Lever) and the fact that this is a 100% American Made instrument and it easy to say that this clarinet possesses and wonderful value.

That doesn’t mean that it is perfect however. In the end, there are a few things that I wish were perhaps executed a little differently. For example, the new case for the Serenade clarinet has a folio pocket on the backside of the case. This is a great idea… except the folio is a little too small to fit a standard music book in. Granted, they might not have intended it for that purpose, but it would have been nice. However, the issues that I found with the clarinet are Very Minor and in no way detract from my overall impression of the instrument’s overall value.

I have also found the Serenade clarinet to be very responsive to barrel upgrades. While the stock barrel is a very good fit to the instrument, as a player progresses, it’s nice to be able to upgrade the performance of the instrument without having to fully replace the instrument. Our overall favorite upgrade barrel was the Backun MoBa barrel in Grenadilla wood. The combination of that barrel on the Serenade clarinet gives a bigger, richer sound, clear throat tones and the ability to push the clarinet even further.

Final Words
In the end, the Leblanc Serenade clarinet is the first clarinet in this new Leblanc resurrection. It was a marvelous way to reintroduce this historic brand to the market. While I firmly believe that other models of Leblanc clarinet will eventually hit the market, I feel that coming out of the gate with a phenomenal performance/value instrument was the right choice.

Of course, if you would like to buy a Leblanc Serenade Clarinet, I do know this awesome shop in Las Vegas that sells them! 😉 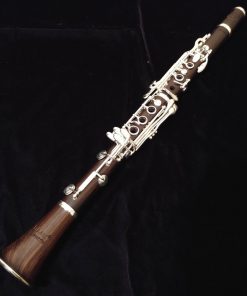 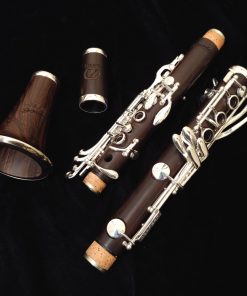