It seems that in the music industry, there are many products that at one time were great industry standards. The trend though is that as demand increases, the companies try to increase production which in turn seems to negatively effect quality. Eventually, the inferior product sells solely because of the popularity of the name.

One of the products that most fits this description (at least for trumpet players) is the Bach Stradivarius.

Honestly, I could spend days on this subject. However, I will try and make it a little easier of a read then that. 🙂

It is true that the Bach Stadivarius trumpets (a.k.a. Strads) quality has been suspect for the better part of the past 2 decades. Once the industry standard for professional trumpets, the Bach Strad became the most popular trumpet on the market.

Bach to Basics
Aside from the bad pun there, I feel that this phrase really describes what Bach has done recently for the Strad. Now it is well publicized that the Union that represented the factory workers (United Auto Workers – UAW) went on strike in 2006. Now, I am not going to get into the strike issue at all in this post, however, a good number of the workers are back to work in the Bach factory and the factory is at full production.

Bach has changed several key aspects to how they are now making the Strad trumpets. 2 of the biggest are in how they are bending the bell and their final assembly process.

Bells
If you take a look at the following pictures of the “crook” of the bell of 2 Bach Strad models. One was from 2003 and the other from late 2007: 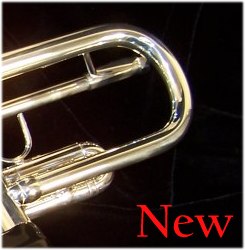 This return to the “double radius” design gives the air column in the bell more focus and compression. This gives the trumpet a much richer and more centered sound. This helps produce the “Bach Sound” that trumpet players originally fell in love with.

Assembly
The other area that I have noticed a big improvement is the assembly. While this sounds like a rather basic issue (why wouldn’t they assemble it well?), it really the area that I feel Bach had become the worst at during those 2 decades.

When an assembler rushes putting a trumpet together, they will push pieces together using clamps and braces. They will rush through not taking the time to make sure that the various braces are aligned properly. Instead, these braces are clamped on and then soldered. Once the clamps are let go, the solder holds the horn together.

What is wrong with this is the fact that metal has a “memory”. This is the metal trying to stay in its shape. However, when clamped and forced to fit when it does not naturally, the metal is being forced from its “memory”. Once the clamps are let go, the metal attempts to go back to its original shape but is held in place by solder. This creates a stress at the solder joints. This stress negatively effects the vibration of the trumpet thus effecting the sound.

Since about June 2007, I started to notice how much better Bach trumpets were being assembled. The horns did not have the same stress that we were accustomed to seeing and in turn, we noticed that these horns vibrated extremely well.

When you combine a better vibrating horn with the original bell design, you get a horn that gives the performance that brought fame to the Bach name.

Final Note
We have had great success recently with Bach Strad trumpets. We have had local professionals & teachers, who had previously stopped recommending Bach’s, sending in their students to buy Bach Strads once again because of how impressed they have been with every horn we put in their hands.

Granted, Bach still can make a mistake here and there, in which we send those horns right back to Bach, but overall as a whole, they really have returned to the quality level that should have never left the Bach name.